About the Salon d' Artiste 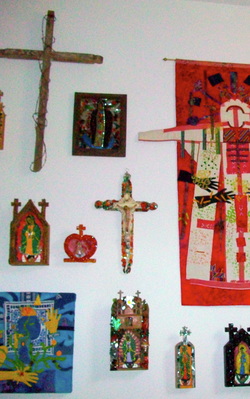 Salon d'Artiste is reminiscent of the Salon Society of Montmartre in Paris of the early 1900s. The concept of the salon began in Paris and was an annual exhibition of living artists' work by invitation. The Louvre allowed them to use one of its galleries. During this time, artists from around the world saw a crucible of creativity that arguably has never been matched.

Paris attracted writers, sculptors and painters -- they provided their own palette of agony and ecstasy as they produced startling and innovative work. Among them walked Gertrude Stein, Rodin, Modigliani, Picasso, Diego Rivera, Utrillo -- all struggling artists of one kind or another living in a time when creativity was encouraged and competitive.

Salon d'Artiste also echoes back to the  Italian Renaissance and the Medici family, a wealthy and powerful Florentine family, rulers of Tuscany from the 1300s to the 1500s, who were major patrons of artists, sculptors, writers and scholars. The Medici family not only financially sponsored the work of Botticelli, Michelangelo, Raphael and da Vici, but they produced three Popes -- Leo X, Clement VII, and Leo XI. The Medicis married into the French and English royalty, thus solidifying their power and reach throughout Europe.

With these historical examples and inspirations, the owners of Salon d'Artiste are dedicated to the support of talent and creativity in the region. Palace Ione, named in memory of one of the owners' mother Ione, houses the Salon, its activities and artists-in-residence. The structure, built in 2010, is also home to family collections and archives, which are available for study and research to approved applicants. One of the owners is the descendent of Carl von Clausewitz, a Prussian military strategist who wrote a famous and wel-studied philosophy of war, On War. Family papers and materials are included in the archives of Palace Ione.